Spotlight on AltroCirco with Ilaria Bessone 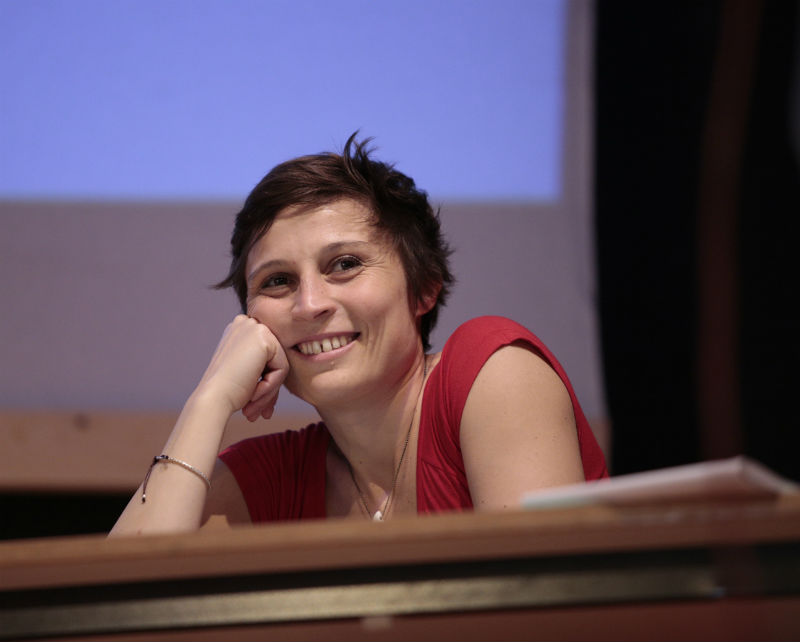 Circus educator and researcher, Ilaria tells us about her journey to become a leading figure in social circus research with AltroCirco and the launch of our new project Circus as Intercultural Encounter.

My encounter with circus happened in 1998, at the age of 14 when I was invited to be part of a performing group in the gym I had attended for years. At the time the only form of circus I knew were the travelling circuses which sometimes stopped in my town. Youth circus was still a very rare phenomenon in Italy: for what I now know, only two youth circus organisations existed, one in Milan and one in Bolzano, very far away from my home.

Our teacher was inspired by a visit to a circus school in Paris, where acrobatic skills were trained with artistic, creative goals. With “Circus Sportica” (this was how the group was named), I learnt juggling, balancing and clowning skills, kept training acrobatics, performed in streets and theatres.

Later I started to attend local meetings and international conventions for jugglers and circus people, workshops, classes and training programs. Circus became for me a great way of making friends, creating connections, building my identity and routines in new places, discovering different cultures and ways of living. It has now become my tool to work with people and – I like to think – my way of contributing to what I imagine as a better world.

I met AltroCirco when it didn’t exist yet! I settled back to Italy after years of travelling and joined the ongoing discussion on the Italian social circus movement within our umbrella organisation, Giocolieri & Dintorni. I met the experienced trainers (Daniele Giangreco, Maria Teresa Cesaroni, Tommaso Negri) who are now inspiring colleagues, and we founded AltroCirco in 2014.

AltroCirco is the project for the development of social circus in Italy, operating within Giocolieri e Dintorni.
It was founded in 2014 by a team of professionals (artists, trainers, educators, and researchers) with the main goals of professionalising the social circus sector and advocating for the acknowledgement of social circus in Italy. It has the aim of connecting the associations and individuals working with circus as a tool for social change in Italy, in order to support a common process of growth and promote circus as an instrument of social transformation.

AltroCirco Training programmes
Social Circus Basic Training (2014 – 2015): 2 modules of one week each delivered by AltroCirco trainers and supervised by two trainers from Cirque du Monde, aimed at training the members of the AltroCirco network.
Formazione Italiana Circo Sociale: an annual training for trainers including 8 modules (200 hours) organised in 2015-2016, 2016-2017, and 2018-2019.
2 training modules on circus, gender and sexuality and circus as a cultural encounter in 2017-2018

Thanks to these training programmes, since 2014 Altrocirco has trained more than 100 social circus trainers, who are currently working in circus and youth organisations all over Italy.

AltroCirco organised 4 editions of Altra Risorsa, an annual international conference on social circus, attended from educators and researchers from all over the world (March 2015, April 2016, April 2017, April 2018).
Since 2017, AltroCirco is playing an active role in enhancing the role and acknowledgement of intercultural communication competences within social circus practices and trainings for trainers at the national and international level. The 2017 edition of Altra Risorsa was dedicated to circus as a tool to build intercultural dialogue with migrants, refugees and asylum seekers. In the same year AltroCirco hosted an international meeting of social circus trainers working with refugees and displaced people and published a booklet including reflections and recommendations, “Circus in discomfort zones”. In 2018 it delivered a training for trainers module focusing on circus as a cultural encounter.

We became members of Caravan in 2016. For us it was an amazing opportunity to share experiences and to be inspired by the work of circus organisations and people from all over the world.
Our trainers and youth benefitted greatly from the training opportunities offered by Caravan’s CTF program and from the youth exchanges hosted by its members. Since the participants were from all over Italy, these experiences also strengthened AltroCirco’s national network of people and organisations.
Through Caravan we also discovered that some of our interests and needs are shared by other circus organisations, and we imagined and drafted international projects together. One of them has recently been funded, Circus as Intercultural Encounter. We’ll be working with the network and some of its members for two years and we are very excited about this new challenge.

“Circus as Intercultural Encounter” was born as a response to needs and concerns shared by a group of Caravan’s members, operating with groups of people with different social, cultural, ethnic backgrounds, and particularly with refugees, asylum seekers, people with migrant backgrounds.
During a Caravan GA, we found out that other organisations considered this issue as a priority in contemporary society and in their local contexts, wanted to position themselves and do something, and considered circus as a powerful tool to open up safe spaces of encounter.
The starting questions involved the specificity of competences required to circus trainers in intercultural contexts, and the centrality of awareness and reflexivity to deal with privilege and historical legacies which shape social structures as well as the cultural encounters within circus projects and workshops.
The idea is to explore the many ways in which circus organisations deal with intercultural encounters, identify good practices and common needs, and create a training module and a manual addressing these specific potentials and gaps.

What I also hope to achieve is a stronger connection between the academic and the circus world, the creation of an alliance between these two perspectives, in order to speak about social priorities with a deeper, stronger and at the same time more accessible/understandable voice.
Circus schools and the youth involved will come out with a broader understanding of the research part of their work: the importance of observing, listening, self-reflecting, collecting and analysing in a structured, systematic way. And the possibility of using circus and other artistic means as research tools. The academic world (represented in the partnership by University College Dublin) will gain a better knowledge and more practical understanding of the specificities of the circus as a tool to promote encounters, and more in general as a field and a methodology for creative, practice-led investigations of society.